If you are daredevil wing walker, the first, and maybe the only, rule of thumb is to never let go of what you’ve got until you get hold of something better.

Business executives could learn a lot from cheetahs, Earth’s most agile land animals. 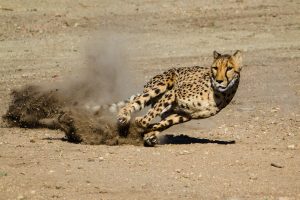 Though their ancestors ran only about 20 miles per hour, today’s cats can accelerate from zero to 60 within three seconds — faster than a Corvette Twin Turbo or a Ferrari Enzo.

But speed alone is not what makes cheetahs such awesome hunters. Computer models show that the best predictor of a successful hunt is not a cheetah’s top speed; instead, it’s how fast it stops and turns.[1]

There are many areas of our business world where we need to learn how to stop.

But one significant area of concern is our ability to stop when we have made a bad decision.

We are in a business climate that emphasizes pursuing new ideas faster and faster. But the pursuit of new ideas quickly is not the problem.

For each implemented new idea, personal egos and business capital are all deeply invested.

Unfortuantely, the fact is that between 70% and 90% of innovations fail, and healthy operations grow weaker every day that they must subsidize floundering projects kept alive by political inertia rather than potential payoff.

It is estimated that the cost of bureaucratic waste has hit $10 trillion and is growing.

Successful business leaders and entrepreneurs need to be better at stopping faster so that the capital waste on failed innovation is limited and scarce dollars refocused on better and more successful ideas.

How to Stop Faster

Here are several ideas on how to stop faster.

Recognize innovations for what they really are—experiments.

Break large, risky gambles into a series of smaller, smarter tests. Clarify the underlying foundations, the best ways to test them, and the metrics that will signal whether to persist, pivot, or pause.

Avoid premature scaling — hiring too many people, building too much capacity, doing too much marketing — before critical assumptions are validated.

Match costs to revenues. Start by confining experiments to affordable, adaptable, and reversible microcosms of the ultimate solution by limiting geographies, customer segments, or product lines.

It’s hard to improve or stop unproductive work if you can’t see what work is being done and how well it’s going.

Executives can inspect physical facilities and assess whether to refurbish or bulldoze them. They can see inventories piling up and decide whether to finish them or write them off.

Develop a system that enables authorized employees to see all workstreams, who is on each team, what else they are working on, and how the work is progressing.

Astute leaders realize that fearful workers will cling to the current work no matter how unproductive.

Much like the daredevil wing walker, employees and managers will stick with what they know they have.  Reward employees for taking prudent risks, but more importantly, reward them for eliminating waste.

Leadership is the key to stopping faster.

Business leaders and entrepreneurs are pushing their employees hard to develop and implement new ideas.  And then, as quickly as the metrics return, projects are either halted or pushed on to full implementation.

Absent from this process is time for fear and evaluation of failure.

Most businesses think fear and failure waste time, energy, and momentum.  And while that may be partially true, we need to remember that failure is neither fatal nor final.

In fact, the fear of failure is often worse than the experience itself.

Even the righteous man falls and gets up seven times. Then, he rises again; it’s OK.

When you learn through failure, you become a success through it. Falling down is part of the pathway to success, and when you stumble and fumble, God will use your time on the ground to build you up.

Sometimes the pathway to God’s greatest desire for your life will be riddled with failure. Don’t drop out; it’s a part of life. On the other hand, don’t make failure such a big deal that you sabotage your own future.

Stop faster.  Become a cheetah in business.  Failure is not fatal.  As God has commanded, every time you fall, get up.