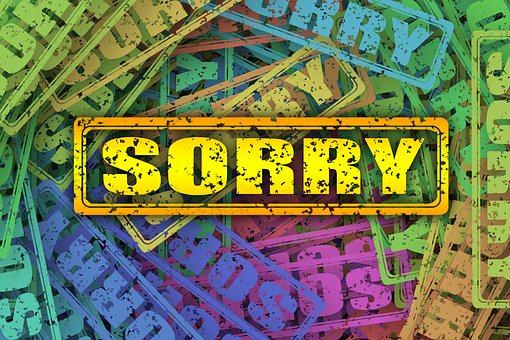 I recently heard a radio story about a high school principal who, years ago, made an obvious mistake and subsequently went on the high school intercom to sincerely apologize to all his students. Because of this action, his relationship and respect with his students was elevated to the point that upon his retirement, many students spoke of this single action despite that fact that many were not even born when he made the apology.

When used rightly, apologies are probably one of the most powerful management tools of any businessperson.

I don’t know any more of the details to this story, but much can be surmised.

First, he obviously, he took ownership of his mistake. He was talking to a large group of teenagers, and if any group is unforgiving of oversights and understatements, it is teenagers.

Second, the apology must quickly follow the mistake. High school life is quick and once the next teenage crisis surfaces, the principal’s mistake would have been moved to the “old news” folder and the opportunity to make a lasting impact missed.

Third, this man must have been sincere. Any announcement over a PA system is mostly just background noise. Just think of the last time you were in an airport-were you listening to what was being said? The words and voice he used had to capture the attention of all the students despite what they were doing.

Finally, for this single instance to have a legacy impact, this principal had to have made amends and changed his own behavior so that what he apologized for never happened again. The action had to be such that he never wanted to have to apologize for it again.

In our business world, we unfortunately have the opportunity to occasionally apologize. If we are not careful, however, how we apologize could potentially eliminate the meaning of the apology.

I recently had my work truck serviced. When they were backing out of the service bay, they backed into a piece of equipment and scratched one door. Of course they immediately called telling me of the problem and how they were going to fix it. The offer of repair and of my inconvenience was as expected, but the conversation was a constant apology. Every sentence included “we’re sorry” to the point they were apologizing for apologizing.

I have read several business resources that discuss the art of apologizing. Maybe it is an art, but it is a simple one for sure. When you or someone under your authority errs, own the mistake, apologize about the mistake, and make amends. Expounding on the three parts of this action are:

Apologizing is not cutting your soul open to bleed. You made a mistake and there is an economic value to that mistake. That is what you need to offer as an amends. It may be worth a little more to maintain a client, a friendship, and a reputation; but not much more.

“Therefore, if you are offering your gift at the altar and there remember that your brother or sister has something against you, leave your gift there in front of the altar. First go and be reconciled to them; then come and offer your gift.

Just as the high school principal did, the Bible says to take ownership, act at once, be sincere, and make amends. In the workplace, these actions will make you the kind of leader most employees will want to work for.